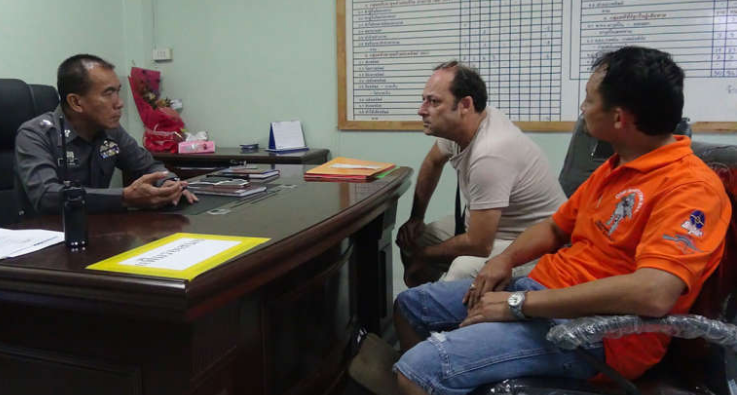 KOH PHANGAN:– A British bar owner on the island of Koh Phangan has filed a complaint with police about corruption at his local administration office.

Lance Wayne, (name transliterated from Thai) 50, claims that five men from the local administration came to his bar and took him, a DJ and a customer forcibly to the local offices to investigate them.

He said that the men took two cash registers as evidence that were opened up later. They contained 21,900 baht, he alleged.

He claimed that deputy ampher chief Wisarut Dechun took 21,000 baht for himself in exchange for not booking him for running an illegal operation.

Lance said this was the third such visit to extort money from him.

He said that his operation was entirely legal.

The deputy chief has denied everything.

Lance said that the men arrived at 2am and demanded money.

They found a customer who had a marijuana joint with him and he was taken in with the owner and the DJ. All were released – the customer after the other two.

The customer was allegedly fined 10,000 baht.

Lance said he was losing a lot of money from this activity and had had enough – he had consulted a lawyer before contacting police.

Reporters found deputy Wisarut who admitted that he had visited the bar but he claimed it was because it was illegal. He said just two people accompanied them back to the local offices.

While they were there he received calls over the phone from elders advising him to let them go without charge. This he said he did, returning the cash registers and a machine used by the DJ.

He said he took no money and demanded no bribe. He said he was fully prepared to be investigated and had nothing to hide.

The matter is now in the hands of the Koh Phangan police.

0
0
0
0   0
previous
next "We Love Thailand!" - Expats show the love and TAT hopes to encourage more to the Land of Smiles